A lot of art collections are exhibited in Motoyu Ishiya.
Among them there is an old wall clock chiming hours correctly second by second for years. Standing in front of the clock we feel like going back to the old days. Please enjoy walking around the premises as to visit a museum. 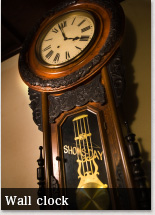 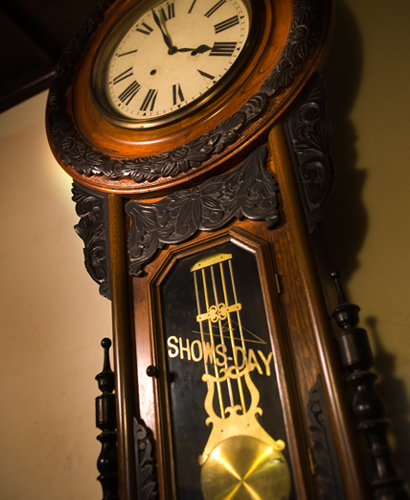 This is a clock made early in Showa area in Japan. Ornaments on the wooden frame around a dial plate are pieces of excellent workmanship. A clock might be not only a tool to know the hour but also a kind of status symbol at that time. It is hung on the pillar before the banquet hall. 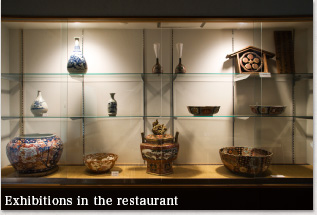 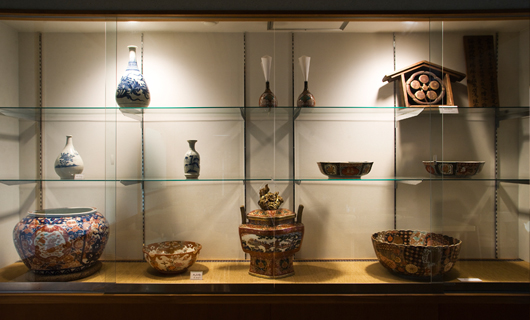 Exhibitions in the restaurant

Old pieces of pottery collected by masters of seven generations, mainly flower vases are displayed at the restaurant where breakfast is served every morning. 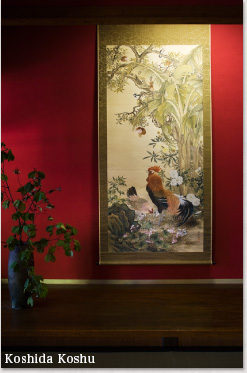 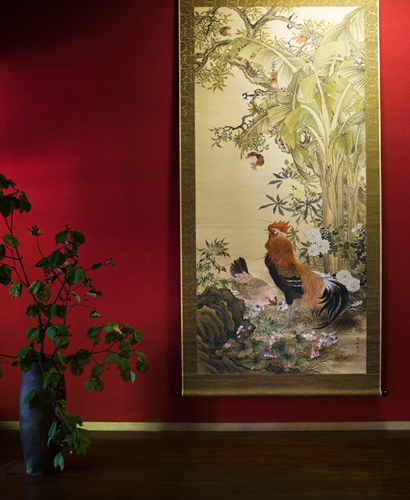 This is a scroll painted by Koshu Koshida, a Japanese style painter noted in connection with Kanazawa. He made a spectacular showing between Meiji and Taisho area. Autumnal trees and flowers are depicted so meticulously to see veins of the leave, and a rooster strongly looking forward is quite impressive. 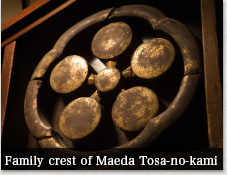 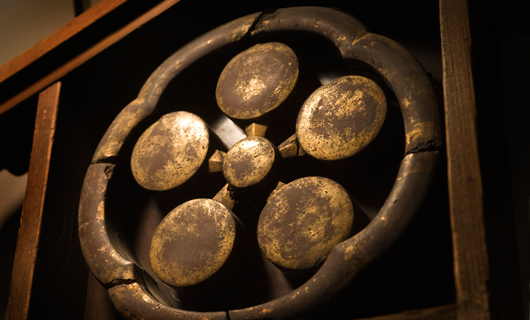 It is a wood-carved family crest presented from Maeda Tosa-no-kami, the chief counselor of Kaga province for the token of his recovery during his stay. It was not permitted to build a public bathhouse within two-li from Kanazawa castle. Receiving the family crest meant that a construction was permitted then. The crest of Umebachi covered with gold leaf is still glittering softly. 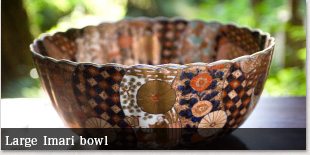 It is a large Imari bowl which is a family heirloom of the Yokoyamas, one of Kaga eight families who served as the administrator of Kaga province. This large bowl was used to serve meals to many people. It is an elaborate piece of kinrande ware depicted chrysanthemum or other patters with colorful pigments and gold, remaining less white ground. 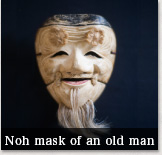 Noh mask of an old man

“Okina ( an old man) is the Noh and not Noh at the same time.” Okina is sometimes considered as a sacred character. It is said that Okina mask was created at the end of Heian period and completed at Kamakura period. 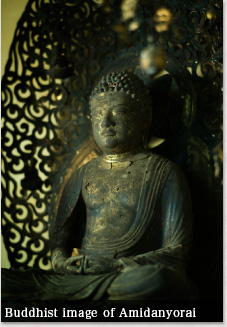 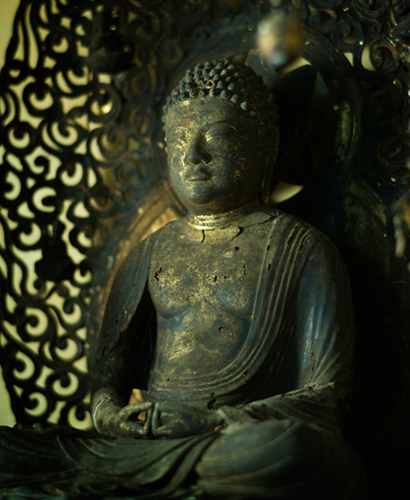 It is a statue of Amida-nyorai constructed in Kamakura period assembling pieces of wood. Just after the world war Ⅱ the seventh master bought pieces of the statue from a dealer. He had assembled them overnight, finished repairing ornaments and enshrined here. 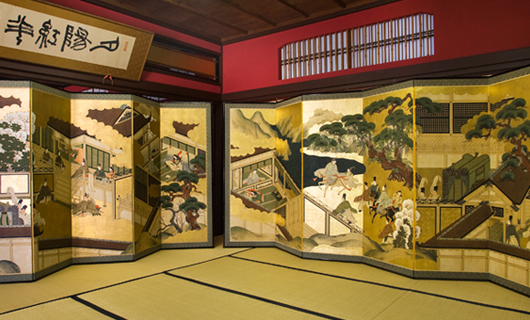 A pair of historical folding screens

It is a pair of folding screens with six panels painted by employed painter of Kaga province at the end of Edo period. It depicts inner scenes of nobles’ house gracefully in Heian period. 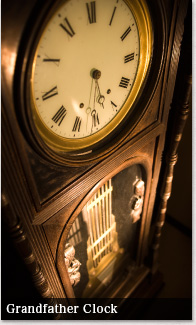 It is a two meter high big clock imported from France in Meiji area. It strikes the hour and one minute after it strikes the same hour again. It reminds us the Christian custom of praying for God in one minute. It is furnished in the entrance hall. 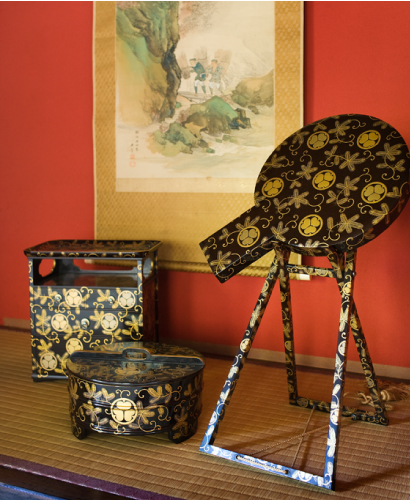 They are toilet articles which Princess Yōhime brought when she got married with Nariyasu Maeda, the 12th lord of Kaga province. She is a daughter of Ienari-the 11th General of Tokugawa. Tokugawa’s family crests – Aoi are delicately drawn by the gold makie on the black-lacquered ground. It gives us some indication of how magnificent the age of Tokugawa must have been. The gate of Kaga mansion built for Princess Yasuhime is a gate of Tokyo university called Akamon now. 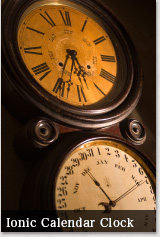 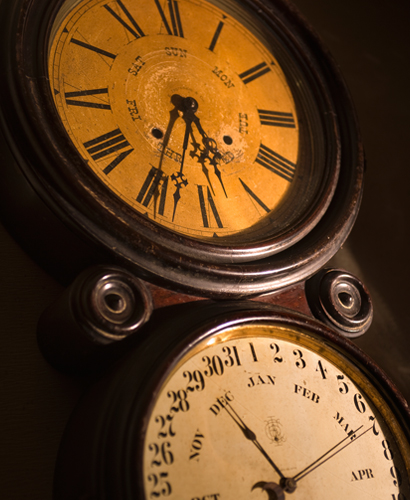 This is a wall clock made in E. INGRAHAM&CO. Bristol of the USA in 1867. Two faces of the clock separated up and down can tell hours, days of the week, months, dates and even years. It is sometimes called “Daruma-tokei” or “Yotsumaru-tokei” meaning Ionic to its unique shape. It is installed at the restaurant. 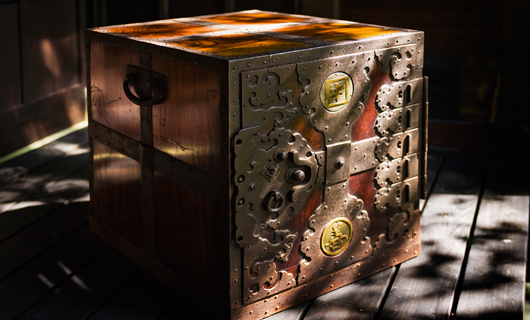 Funa-tansu or a sea chest

This is a cabinet furnishing on the ship once belonged to the Sakurais who was one of the wealthy farmers and an owner of Kitamae ship. The funa-tansu was washed out to the sea keeping money and the precious documents in it when the ship sank. So it was strongly made to avoid being destroyed by hitting on the rocks with Iron fittings riveted around it. 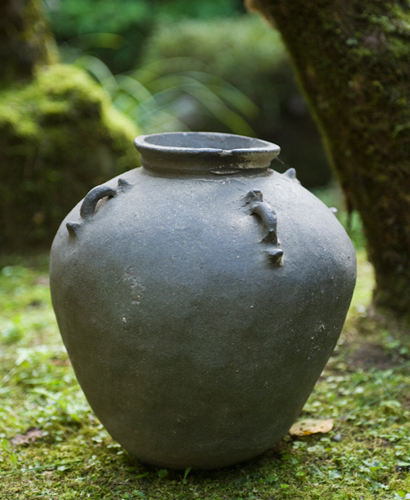 Suzuyaki is a kind of sueki, gray colored unglazed earthenware produced in Suzu during mid-Heian to Muromachi area. The subtle and profound beauty is said to be compared to ones of Japan’s six famed kilns. Our treasure is a jar produced by about 1400. 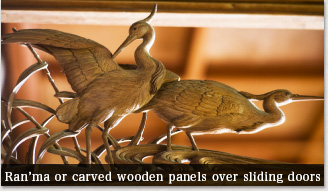 Ran’ma, its carved patters are elegantly shown by natural light and shadow. The ran’mas installed in Kujaku-no-ma was carved by an artisan in Edo period. The main decorative motifs seen here are orchids, bamboos, chrysanthemums and umes, which form “Shikunshi”. The one in Niwatori-no-ma is decorated with roosters, quails and herons depicted in a wonderfully lifelike way by an artisan in Meiji period. Archaeological finds of the tumulus period

Socketed bronze spearheads, comma-shaped beads and other articles of the tumulus period excavated in the suburbs of Kanazawa are displayed. They are the collection of the 7th master.